New Zealanders of average incomes should migrate to Australia. Okay this is a somewhat provocative statement but vast numbers of Kiwis make this exact decision. And why not? Not only will they typically enjoy higher incomes in Australia they will also pay less income tax. Even if they earn exactly the same equivalent income as what they earned in New Zealand they will find that Australia has a much less onerous income tax system. How much less onerous? Lets have a look.

The three tables below do an income tax comparison. For simplicity we can ignored the medicare levy in Australia and the ACC levy in New Zealand as they both modest and roughly the same.

The chart below shows in New Zealand dollars the tax taken for various incomes under the two alternate income tax codes. Clearly the Australian income tax code is far more favourable for people of modest income. 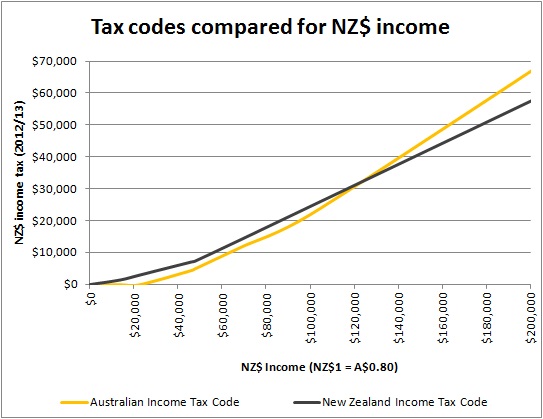 The comparison is for tax rates in the 2012/13 financial year. If the New Zealand government wants New Zealand citizens to stay in New Zealand then it ought to reduce the tax rates at the lower end of the income range.

16 thoughts on “New Zealanders should migrate to Australia”